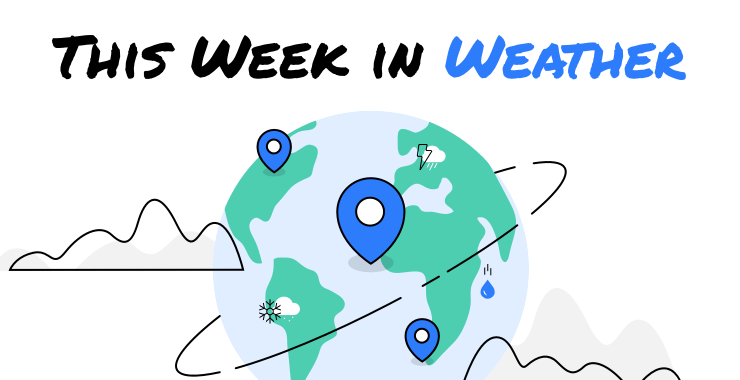 This Week in Weather 5/18: Thunderstorms and a Tropical Depression

For This Week in Weather, we share the big weather stories in the US for the coming week of May 18, 2020 and how it will impact your business. So let’s get to it!

Widespread rain and thunderstorms are expected from the Ohio/Tennessee Valleys, eastward into the Carolinas/Mid Atlantic, and northward through portions of the Northeast on Monday through Tuesday. Current indications suggest the threat for heavy rainfall and potential flooding in some locations during this period. Across the West Coast/Intermountain West, widespread valley rain and mountain snow is anticipated on Monday into Tuesday, along with below normal temperatures.

The most active weather across the West should then begin to shift into the Pacific Northwest and Northern Rockies by Wednesday. In between these areas of active weather, much of the Great Plains and Midwest will see dry weather courtesy of high pressure, with temperatures trending above normal. One exception could be across portions of the Northern Plains, especially over the Dakotas, and possibly extending southward into the Nebraska panhandle, where a pattern favorable for thunderstorm development may evolve by later Tuesday into Wednesday. Thunderstorms in this region could become strong to severe.

There is also the potential for a tropical depression or tropical storm to be present off the Southeast coast early this week. This system is then expected to track northeastward and not impact the United States directly.

Business impact: Energy grid providers should be on alert for lightning damaged infrastructure, with teams ready to respond.

Across the West Coast/Intermountain West, below normal temperatures are likely to continue, with periods of valley rain and mountain snow persisting across the Pacific Northwest into the Central and Northern Rockies. Across the middle of the country, thunderstorm risks remain focused across the Dakotas on Thursday, and then begin to expand southward into Nebraska and Kansas by week’s end. Thunderstorm development in this region could become strong to severe once again. Otherwise, expect a continuation of above normal temperatures across much of the Great Plains into the Upper Midwest to close out the week.