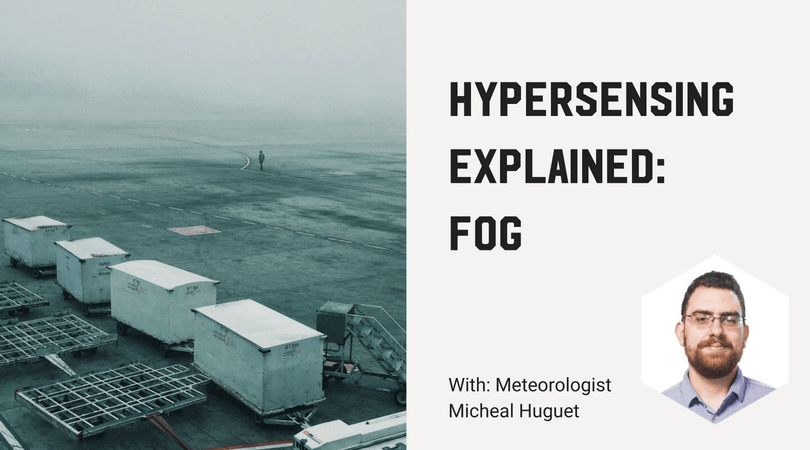 Taking the Mystery Out of the Fog Forecast

What is fog, if not mysterious? It’s also notoriously difficult to forecast. For this blog post, I turned to ClimaCell meteorologist Micheal Huguet to get the low-down on low-lying clouds. Our customers in mobility sub-sectors care about foggy weather, since it affects if and when planes can take off and land, the speed at which urban transportation and private vehicles can safely move, and even if a drone mission is grounded or not. The urban supply chain requires accurate fog forecasts as well, since slower-moving ground transportation can cause delays to pile up.

ST: What makes fog so complex to forecast – and how do you do it?
MH: Well, you’ve got to like complex problems, to start. Forecasting fog means that you’re essentially predicting where a cloud will form. When we forecast it, we’re either looking for temperatures to rise enough that it’s no longer condensing at the surface (for radiation, one type of fog), or when the wind direction shifts so that the fog is no longer advecting onshore. You can also look for increasing winds to forecast the end of radiation fog, which can mix up the lower levels and help dry them out.

ST: What’s the difference between radiation fog and advection fog?
MH: There are actually many types of fog, but I’ll tell you about the two main types. There’s radiation fog when moisture is trapped at the surface while temperatures drop, condensing into a cloud. This usually happens overnight and early mornings. There’s also advection fog where moist, cool air moves over a warmer surface.

ST: So will you see foggy weather anywhere warm air collides with cool air?
MH: Moisture is another key part of the equation. As a result, this often happens near oceans or lakes, and can also be referred to as “sea fog.”

ST: Is that what happens with London and San Francisco fog? Both are well-known for being extremely foggy, and London is even known for the London killer fog of 1952.
MH: We were just in San Francisco last month and could never get a good picture of the Golden Gate Bridge because there was foggy weather every day! This happens a lot on the US West Coast because of prevailing westerly winds pushing moist maritime air onshore, which results in the San Francsico fog. London is similar but not exactly the same. There’s foggy weather in London because it’s near water and often has calm winds. San Francisco-type westerly winds would actually clear out London fog.

ST: When we talk about visibility, are we only referring to the fog forecast?
MH: A host of things can cause decreased visibility, including mist, haze, smoke, and dust.

ST: Now, what’s the difference between fog vs. mist and haze?
MH: Fog is when the visibility drops below 5/8 of a mile. Haze and mist vs. fog are when the visibility is higher but still obscured by moisture. Smog is smoke mixed with fog, usually caused by pollution, and can be caused by fires.

ST: Which MicroWeather factors help you provide a more accurate fog forecast at ClimaCell?
MH: Our use of wireless networks means that we can observe any sort of moisture in the air. Our exclusive micro data for temperature, dewpoint, and wind provide a closer look at what’s going on in the lower atmosphere. High frequency METARs in the HyperCast weather software allow us to see observed visibility changes earlier than some other weather software out there.

ST: Finally, is it true that fog can produce lightning?
MH:  No. Thunderstorms need to have some extreme vertical motion going on to create the friction required to cause lightning. That kind of vertical motion would usually cause fog to dissipate.

* * *
There you have it. To get a fog forecast for your location, including job sites, energy assets, airports, or even outdoor events, try HyperCast weather software, or to get a weather data stream, check out our MicroWeather API.