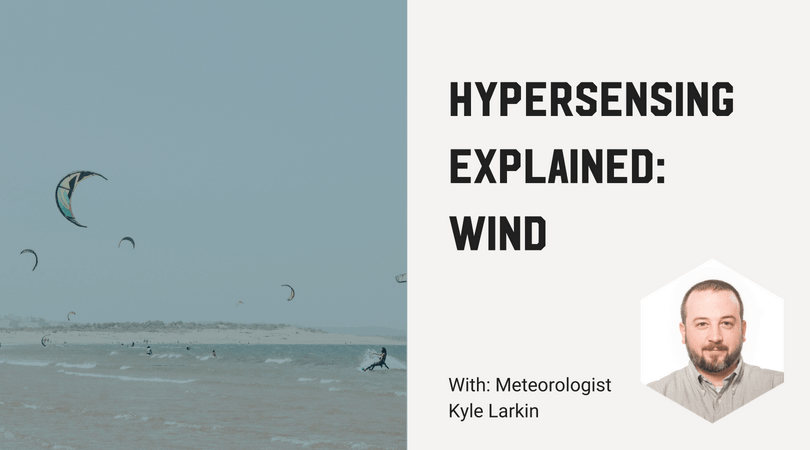 Wind Forecasting from the Ground Up

For this post, I sat down with ClimaCell meteorologist Kyle Larkin to shoot the breeze and ask him all about wind and wind forecasts. There are many industries that have some impact from winds, but some of the most obvious are aviation, shipping, and renewable energy. Much of the time, wind forecasts are used to optimize efficiency. This can be in order to plan a more optimal route, in the cases of aviation and shipping, or to decide how best to optimize wind power production. However, many industries such as construction, outdoor events, and professional sports also have some thresholds for wind speed beyond which it is no longer safe to operate, so wind forecasts can also be crucial for safety.

STL: Is ground-level wind stronger than the same wind gust at a higher altitude?
KL: Measurable wind occurs at all altitudes where there is a measurable atmosphere. Once you get high enough, the air is so thin and the molecules so far apart that it’s more or less meaningless, but by then you’re nearly in space. Wind tends to increase with height until reaching the tropopause, though the increase isn’t uniform, and winds from aloft can sometimes mix down to the surface. There are upper-level concentrations of enhanced winds that form currents known as jet streams.

STL: Can wind affect flights?
KL: Wind can greatly impact the duration of a long-haul flight. For example, in the mid-latitude northern hemisphere, it’s typically faster to fly eastward than it is to fly westward, due to prevailing upper-level wind patterns. Wind can also cause turbulence, if wind speed or direction changes greatly with altitude.

STL: Why are some locations particularly prone to windy conditions, of course, I’m thinking of the “Windy City,” home to Chicago’s O’Hare Airport.
KL: It really depends on the location. As for Chicago wind, the city does have a lake breeze, and a great nickname, but it is not actually a significantly windier place compared to the rest of the US. Boston actually has a higher annual average wind speed.

STL: How is wind formed, or what causes wind?
KL: At the most basic level, wind is caused by differences in atmospheric pressure. If one area of the atmosphere is denser than another, the tendency will be for the denser air to move into the space of the less dense air. The atmosphere is constantly seeking a balance, and it does so by moving things around (wind). However, the balance is constantly upset, largely by differences in heating/cooling rates since temperature has such a large impact on density.

STL: How is current wind speed measured?
KL: Current wind speed is physically measured by what’s called an anemometer. There are various types, ranging from what basically amounts to a fan up to electronic sensors.

STL: What causes wind to be dangerous to pedestrians?
KL: Typically, it’s wind gusts that are most dangerous to pedestrians. A steady breeze from a constant direction is typically manageable. Highly variable direction and/or speed is often the most difficult to manage. For a sense of scale, at about 10-15 kt loose paper will blow away, while at 20-25 kt umbrellas are hard to manage. It’s really not until around 30 kt that you have to start leaning into the wind.

STL: What’s the wind speed scale, and what’s the difference between knots and mph?
Speed is usually expressed in either knots or mph, though the scientific unit is actually meters per second. Knots are equivalent to “nautical miles per hour.” The nautical mile is equivalent to 1 minute of longitude, which is useful when dealing with maps and long distances (such as in maritime or aviation applications). Miles are slightly shorter than nautical miles (1nm = ~1.15 mile), so the difference in mph vs knots really becomes most apparent when dealing with larger wind speeds.

STL: Do human activities ever cause wind speed or direction to change?
KL: Buildings alone can have a direct impact on both wind speed and direction, by physically redirecting the wind and in some cases causing funneling effects. Some urban areas also act as heat islands, warming faster than otherwise would be the case, which in turn has some impact on wind patterns.

STL: How easy is it to produce a wind forecast for tomorrow?
KL: It depends on the location and the situation. Locations with highly dynamic weather patterns and lots of localized effects can be challenging. In some other places, the wind does the same thing every day for an entire season and can be very predictable.

STL: How are wind maps created?
KL: Wind maps are typically based on model output, which depending on the model may account for the various factors in a wind forecast to differing extents.

STL: How is wind chill factor actually measured and calculated?
KL: Wind chill is really an estimation based on actual temperature, combined with estimated heat loss due to wind. There are multiple calculations, but they all seek to provide an estimate of skin temperature within a reasonable degree of accuracy.

STL: Finally, what are the key factors that go into a wind forecast?
KL: Wind forecasts really benefit from using a traditional “forecast funnel” approach. Basically, you look at the large-scale pattern first, then progressively “zoom in” to consider smaller-scale, increasingly more localized impacts.
* * *
For more, check out the Wind section of How Not to Drown Your Drone, and the previous post in the series, Hypersensing Explained: Fog. To get wind forecasts for your exact location, including job sites, energy assets, airports, or even outdoor events, try HyperCast weather software with full meteorologist support, and check out our MicroWeather API  to get a live weather data stream.