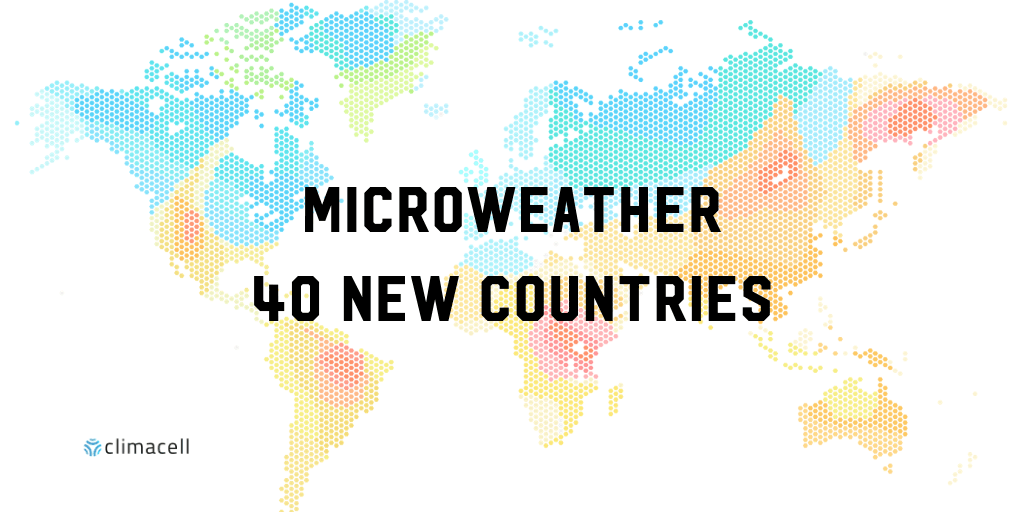 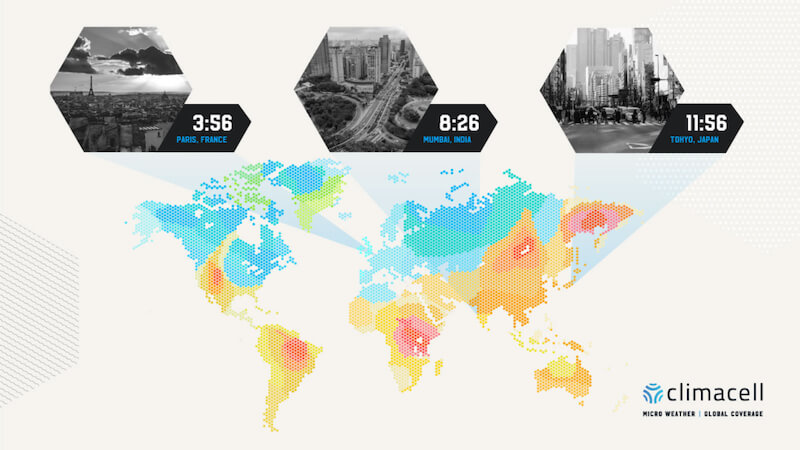 BOSTON, MA — January 10th, 2019 — Worldwide, extreme weather cost at least 5,000 lives in 2018 and put 28.9 million in need of emergency aid. Given the rising human and economic costs of weather variability, big data may hold the key to outsmarting the elements – especially in places that haven’t traditionally had access to weather observations. Today, ClimaCellⓇ, a company with new technology to forecast location-specific, low-altitude MicroWeather, announced the global availability of its high resolution data. Among 39 countries, the first phase of the company’s global rollout sees advanced weather data come to India.

With a low penetration of forecasting tools, India, like others in the developing world, is especially at risk of unexpected disasters like flooding and volatile monsoon seasons. According to the World Bank, the impacts of long-term weather variability could cost India up to 2.6% of its GDP by 2050, and according to the UN, has cost India $80 billion since 1997. The country, which is the world’s second-most populous, has just a few functioning weather radars to serve its 1.3 billion people. For comparison, the United States has 159 radars for a population of around 325 million. Unexpected weather hits especially hard in countries where agriculture is the main source of income for the majority of the population.

The company’s first Indian partner is the Tata Trusts. Mr. Ratan Tata, in his personal capacity, had backed ClimaCell, in the initial stages, to help MicroWeather data impact the developing world.

“By leveraging a ‘big data’-centric approach to the issue, we can make a significant contribution to improving weather awareness across wide swaths of society. That includes providing weather data to parts of the world which have not typically had access to it — including the developing world.”

Beyond the daily benefits of more accurate weather forecasting for industries such as logistics, transportation, and agriculture, better weather forecasting puts more control in the hands of those affected most by weather-related events. Per the UN Office for Disaster Risk Reduction, most low-income countries need more granular data to be able to quantify the effects of weather-related events.

R. Venkataramanan, Managing Trustee of the Tata Trusts, said, “An important need of the Indian farmer is a weather forecast which is precise to his geography and accurate. The Trusts, which are engaged in large-scale rural uplift programmes, are happy to partner with ClimaCell to leverage that support.”

In the developing world, ClimaCell’s new technologies will bring granular weather data to mobility solutions, public safety applications, proactive agriculture solutions, and even novel insurance products. ClimaCell is working with leading insurance and reinsurance companies to enable smallholder farmers to get better insurance that will leverage this high-resolution weather data.

Shimon Elkabetz, ClimaCell’s CEO and co-founder, said,
“This is a big step in expanding our MicroWeather technology globally, supporting developing countries and underserved sectors. ClimaCell is dedicated to building world-class weather technology to make our world better, and we are on track to cover the globe and become the world’s leading weather technology company.”

ClimaCell’s current offerings serve customers across both traditional and emerging industries, including aviation, automotive, shared mobility, UAVs, and utilities. Its MicroWeather products include HyperCast™ a web-based interactive HD weather map and the ClimaCell API, which provides a live weather data stream for integration with other software and platforms. The company works with Delta, JetBlue, Ford, National Grid, United, as well as companies working in emerging technologies like unmanned robotics and autonomous systems. ClimaCell has also received an investment from Intact Ventures Inc. (Intact Ventures), the venture arm of Intact Financial Corporation, Canada’s largest provider of property and casualty insurer. ClimaCell’s data will become a key input into next-generation insurance products.

Historical, real time, forecast, and nowcasting data is available in ClimaCell’s API. Get it here!

About Intact Ventures:
Launched in 2016, Intact Ventures is the strategic venture arm of Intact Financial Corporation – Canada’s largest provider of property and casualty insurance and a leading provider of specialty insurance in North America. Intact Ventures’ goal is to invest and partner with companies that are defining the future of transportation, data, AI, and how people interact with their homes, cars and surroundings. More information is available at intactventures.com.

About The Tata Trusts:
Since inception in 1892, the Tata Trusts, India’s oldest philanthropic organisation, have played a pioneering role in bringing about an enduring difference in the lives of the communities they serve. Guided by the principles and the vision of proactive philanthropy of the Founder, Jamsetji Tata, the Trusts’ purpose is to catalyse development in the areas of healthcare and nutrition, water and sanitation, education, energy, rural upliftment, urban poverty alleviation, and arts, craft and culture. The Tata Trusts’ programmes, achieved through direct implementation, partnerships and grant making, are marked by innovations, relevant to the country. For more information, please visit https://tatatrusts.org.