Hurricane Season 2020 Moves to Naming Storms with the Greek Alphabet

For just the second time in history, the National Hurricane Center must use the letters of the Greek alphabet to name storms for the rest of the 2020 season. This has only happened once before in 2005. 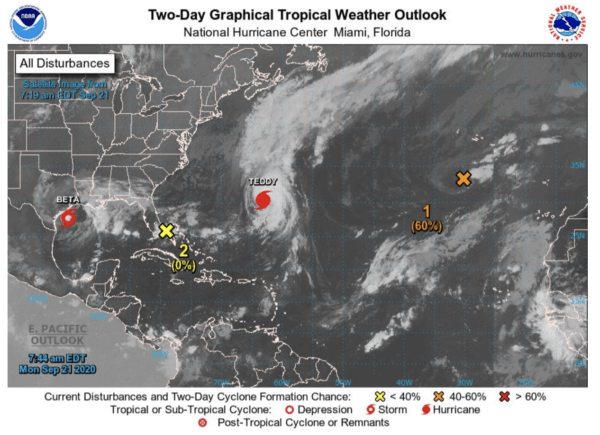 We are also approaching the most named storms in a season – ever. There are currently at 23 named storms, with the record of 27 storms set back in the same 2005 season. And there are still two months left in the traditional hurricane season for 2020.

This is a unique occurrence, and is clearly testing the naming conventions set by The World Meteorological Organization at the beginning of the season.

Tropical Storm Beta, the second name from the Greek alphabet contingency list, formed in the Gulf of Mexico. A Tropical Storm Warning is in effect from Port Aransas, TX to Morgan City, LA. Maximum sustained winds are 50 mph. Tropical-storm-force winds extend outward up to 195 miles in front of the center of Beta. A slow west-northwestward track towards the Texas coast should continue, with an eventual landfall as a Tropical Storm occurring overnight Monday near Matagorda Island, TX. 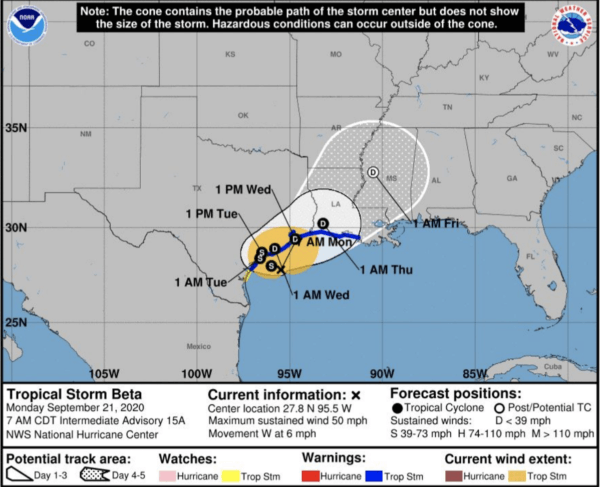 Upon making landfall, a slowing/weakening trend develops, before ultimately pushing off to the northeast by mid-late week as a Tropical Depression. Regardless of the landfall location, excessive rainfall amounts of 6-10” expected near the Texas coast and portions of the Louisiana coast, with localized amounts in excess of 15” possible. 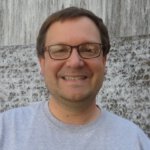 Nick is an operational meteorologist and weather forecaster with more than 11 years of experience in the meteorology profession. His passion for watching the weather began in Wisconsin at a young age and led him to the Great Plains, where he photographed and documented a variety of weather phenomena from severe thunderstorms to tornadoes, floods, and even blizzards. His breadth of forecasting experience stretches from the Plains and East Coast to the complex and dynamic local weather patterns in the Intermountain West and British Columbia, Canada. Nick completed his B.S. in Atmospheric Sciences from the University of Wisconsin, and has also earned an M.S. in Meteorology from the University of Oklahoma.
climacell forecastforecasthurricane season