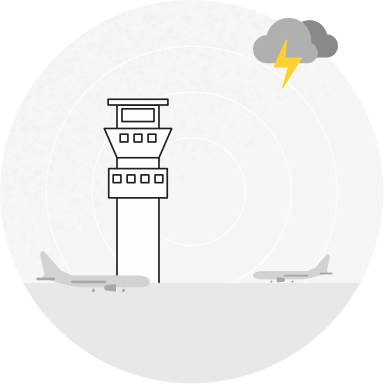 How Airlines Are Protecting Their Parked Planes During Corona

There have been a bunch of stories this past week about grounded planes and parked planes by the thousands, just sitting around, you’ve seen the images. This means airlines are facing new challenges right now they’re not not often used to facing as planes are sitting around longer than usual.

How should parked planes be managed?

It might sound like a trick question, if the planes are parked then there’s not much that needs to be done, right? Wrong. The average 737 costs $90M so protecting those parked planes is critical for business operations, which are at constant threat from the weather.

Weather can wreak havoc on parked planes, especially if they’re sitting out in the open, and here are a few weather factors airlines need to monitor closely and proactively take action against as opposed to reacting after the physical and financial damage has already been done.

Hail can come out of nowhere and depending on the severity and duration, cause both damage and cosmetic damage. Just take into account a new paint job costs on average $100,000, and hail can be a major contributing factor to ruining the look of a plane’s exterior.

Just last week a tornado ripped through John C Tune Airport and has already caused more than $90M worth of damage. Parked planes close together and out in the open are prime targets for tornados and related serious weather events.

The longer a plane sits in the same place without being turned on, dust build up can occur. With airplane engines and air systems costing north of $30M, dust can be an unexpected cause of stress for airlines.

There’s endless construction happening at airports all around the world, in addition to FOD (foreign object debris) that can be blown around. Airlines need to make sure when high winds hit that all loose equipment surrounding their planes is tied down and secure, and that no additional FOD is at risk of slamming into their planes.

The best way to protect your parked planes is to be ahead of the weather, and be able to predict the impact of incoming weather on your fleet parked planes so you can move your planes to a more secure location. Whether planes are going to be parked for days/weeks or just overnight, by predictively monitoring for for impact across things like hail, tornado, dust, and high wind, you’ll be able to know when to take action and avoid more serious financial implications.

Currently CMO at ClimaCell, Dan Slagen is a 4 time start-up executive specializing in scaling global go-to-market functions from early stage to $100M+ in ARR. With experience in both B2B and B2C at companies such as HubSpot and Wayfair, Dan has built teams across marketing, growth, sales, customer success, business development, and also founded and sold his own video tech start-up. A frequent contributor and advisor to the start-up community, Dan has spoken at more than 50 conferences and has been featured in The New York Times, The Wall Street Journal, Forbes, CNBC, TechCrunch, and Bloomberg TV amongst others. Above all else, Dan believes in creativity, drive, and a people first mentality.
aviation