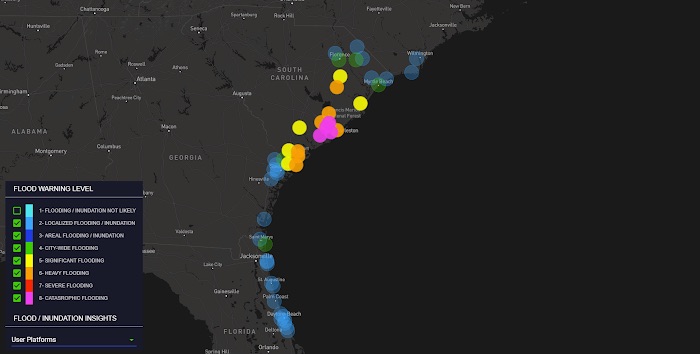 TL;DR: While Dorian has weakened to a Category 2, flooding, including catastrophic flooding (in pink), is expected September 5-6 in some coastal areas.

Dorian, now making its way to the East Coast of the U.S., is the strongest hurricane of the season. It struck the Bahamas earlier this week, leaving casualties and devastating damage in its wake, with 60% of the island’s land underwater. While above the Bahamas, Dorian reached category 5 intensity, with wind velocity up to 300 km/hour and tremendous amounts of precipitation, with accumulation of up to 500mm. The combination of high ocean waves and inland flooding caused catastrophic flooding and inundation on the island.

Though Dorian has weakened to a category 2, it remains an extremely dangerous storm that will bring storm surge flooding, high winds, and very heavy rains to coastal areas in Florida, Georgia, South and North Carolina. Below is the forecast from ClimaCell’s Flood Forecasting system (CGUFF)  for September 5-6, providing a view of expected flooding in towns from Florida to South Carolina. Areas marked in orange will experience heavy flooding, red areas will see severe flooding, and catastrophic flooding is expected in areas labeled in pink.

Figure 3: View of Flooding Across the U.S.

There is a growing understanding in the scientific community that climate change will intensify and accelerate weather conditions, as well as the duration and intensity of hurricanes. We must be better prepared for projected changes with better monitoring, high-resolution data, and simulation tools that will allow us to make better decisions in a changing climate.