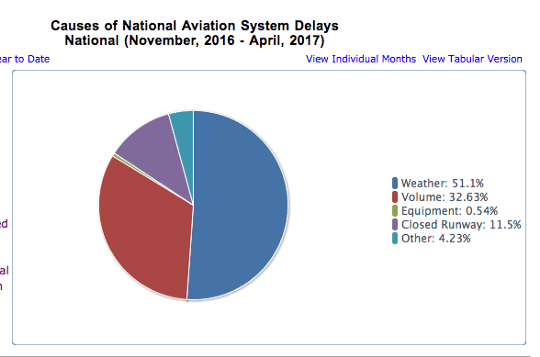 Causes of National Aviation System Delays nationwide, showing 51.1% from weather during the winter months. From: https://www.transtats.bts.gov/OT_Delay/ot_delaycause1.asp?type=51&pn=1

All year round, aviation weather response decisions are needlessly imprecise for lack of real-time data. Back in June 2017, a scorching Boston hit 95 degrees and a looming thunderstorm threatened Logan Airport, but nearly nobody knew when it would hit. By the time the sky darkened, temps dropped to 79 degrees, and a wall of rain sloshed down, nearly all departures from 4:59 PM had been delayed, some out of an abundance of caution. In April, an “unprecedented storm” wreaked havoc on Delta’s operations in Atlanta. Flight delays are attributed to either Extreme Weather or National Aviation System (NAS), and the classification comes down to the level of human control.

The Bureau of Transportation Statistics tracks two types of weather delays: Extreme Weather and National Aviation System. Delays attributed to the former mean, “Significant meteorological conditions…that delay or prevent the operation of a flight such as tornado, blizzard or hurricane,” and are certainly warranted. However, NAS delays “are the type of weather delays that could be reduced with corrective action by the airports….” and in the winter, real-time reports and forecasts for precipitation conditions are the missing link in reducing NAS delays.

Airlines look for ways to take off as close to their scheduled times as possible, but this can be a real challenge when forecasts are only infrequently updated while conditions on the ground are constantly changing.

This coming winter 2017–2018, tech-savvy airlines in the U.S. are taking advantage of next-generation tools that enhance traditional weather monitoring.

ClimaCell offers real-time weather reports with highly accurate forecasts that are refreshed every minute. Airport-specific, ground-level precipitation classification and intensity helps aviation operations reduce the delays within their control. This winter, whether at the gate, during taxiing, and in-flight, tap into the most granular, airport-specific weather data on the market with the HyperCast dashboard for aviation. Schedule a demo today!