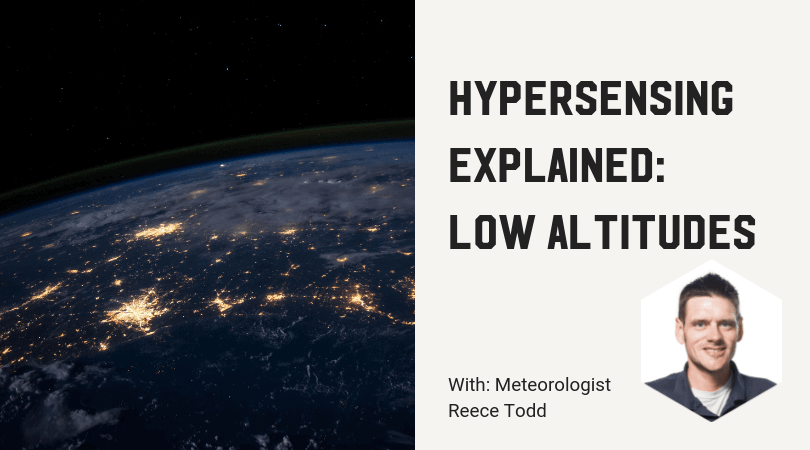 The trouble with low visibility conditions is that they are literally under the radar. Anyone who has driven a car in the fog knows how frustrating, and dangerous, low visibility conditions can be. Let alone, anyone who has operated unmanned aerial vehicles or been involved in transportation or delivery operations in mist, haze, or fog. Coupled with the fact that there are relatively few radars in the US and even fewer in the developing world, any radar outage can be catastrophic for weather forecasting if no other sensing tools are available. ClimaCell meteorologist Reece Todd explains why – and what to do to avoid the limitations of radar-based weather sensing at low altitudes.

ST: So are mist and fog, which we recently wrote about, which can snarl on-demand delivery operations in reduced visibility conditions.
RT: Right. Finally, any weather below 400ft can affect drones – whose operators rely on their eyesight alone to estimate weather conditions.

STL: How much of the US does not have doppler radar coverage?
RT:  Puerto Rico comes to mind – it had no radar at all for 9 months after Hurricane Maria. There is a handy map that depicts traditional radar coverage at 10,000 feet, 6,000 feet, and 3,000 feet above ground level.

STL: As we know, a lot of weather occurs below 10,000 feet!
RT: Yes, when looking at the areas with coverage down to 3,000 feet, you see large tracts of land exempt from coverage in the west, and surprisingly numerous gaps in the Plains, and even a few east of the Mississippi River as well. 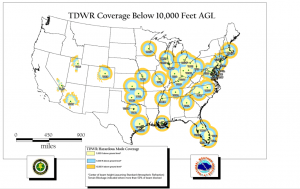 STL: How far can each radar sense, in terms of distance in miles from the radar?
RT: I have read under perfect conditions, up to 230 km (~140 miles). Any obstruction in the radar beam’s path diminishes the distance a radar beam can sense. 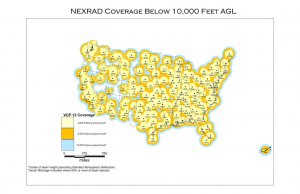 STL: Why are there so few radars out there?
RT: Cost is a major factor. There was an independent study recently that mentioned the estimated cost of installing a new radar is near $10,000,000; with an additional estimated $500,000/year in maintenance costs.

STL: I have heard that there will be no more radars manufactured until 2020 – is this true?
RT: I would say even longer, given the cost factor. Over the past decade there have been a few bills proposed in Congress to expand radar coverage (especially for any large cities where gaps in radar coverage exist, like Charlotte, NC), however nothing has come of either of these bills. Unless traditional weather radars become cheaper to build and maintain, I would be surprised if there are any more than a few installed over the next decade.

STL: Why are government weather observations based on national radar insufficient for use in low-altitude weather forecasting?
RT: Traditional national radars are installed on towers, often at a height of 15 meters (near 50 feet), but potentially as high as 30 meters (near 100 feet). This is done to avoid the radar beam being blocked by nearby trees/mountains/buildings. The tilt of the radar beam is no lower than 0.5°. As the beam targets farther and farther away from the radar site, this tilt of the radar beam restricts detection of precipitation to elevations higher and higher from the ground, resulting in a decay in accurate low-level measurements. For example, a radar beam trying to detect precipitation 75 miles away, with 0.5° tilt, can’t see anything below approximately 3,500 feet – potentially above an entire cloud that may be producing drizzle. Compare that to the flying altitude of drones – just 400 ft. Conversely, traditional weather radar may falsely detect precipitation at high altitudes far away from the radar. In these cases, it may actually be evaporating before reaching the ground.

STL: Does low-altitude weather move faster than high-altitude weather?
RT: Generally no – often the opposite is true. Low-altitude weather is typically a result of moisture “trapped” near the surface below relatively drier air aloft, in conjunction with little to no steering current (wind) to scour out the moisture. Think about the implications for anyone in ground operations or transportation. Even individual drivers on the road in low visibility. You might be looking at hours of low visibility that is unpredictable.

STL: What kind of weather changes on its way down from high altitudes (anything other than precipitation?)
RT: Winds and temperatures both change through the atmosphere. Winds are generally higher in high-altitudes and lighter in low-altitudes. Temperatures certainly trend from colder to warmer, as you go from the higher altitudes to lower altitudes, but can then trend cooler again near the surface. This is called a temperature inversion, and is more common than you would think – especially at nighttime. Stronger inversions, when coupled with high relative humidity can produce fog and/or thick low clouds producing drizzle/light rain, which is not easily detected by traditional radar.

STL: Are there any radars that can sense the weather at ground level?
RT: Theoretically, all weather radars could if there were no obstructions, and you had LOTS of radars to prevent coverage gaps. That is not a possibility though in the real world. Fortunately, there are innovative technologies that ClimaCell utilizes, to fill in those gaps at and near ground level.

STL: How can I find the closest radar near me?
RT: For traditional weather radar sites, pick a location nearest to you at https://radar.weather.gov/

That’s all, folks. I’m always amazed how much weather is hidden in plain sight when you look through the lens of traditional tools only. When the Seattle, WA radar recently experienced an outage, it affected all weather forecasters there, but not everyone was blind – read more here. Thanks to Reece for his elaboration on the challenges faced by consumers of low altitude weather forecasting. In a nutshell, the three reasons low altitude forecasts disappoint are:

Further reading:
How to Interpret a Weather Radar
How Radar Works
Taking the Mystery out of the Fog Forecast